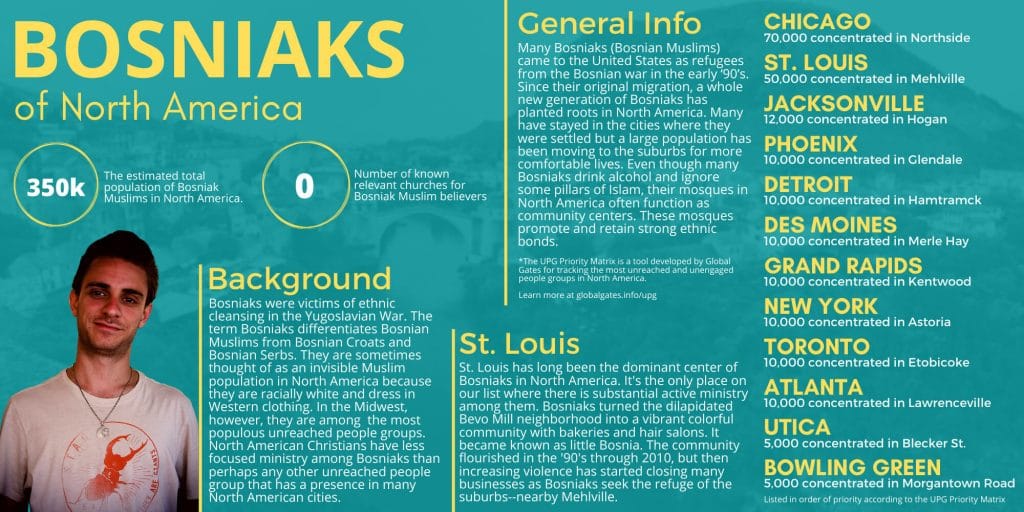 Many Bosniaks (Bosnian Muslims) came to the United States as refugees from the Bosnian war in the early ‘90’s. Since that time, a whole new generation of Bosniaks has planted roots in North America. Many have stayed in the cities where they were settled but a large population is moving to the suburbs for more comfortable lives. Even though many Bosniaks in North America drink alcohol and ignore some pillars of Islam, their mosques

Bosniaks are one of the most unreached Muslim groups in North America.

Bosniaks were victims of ethnic cleansing in the Yugoslavian War. The term Bosniaks differentiates Bosnian Muslims from Bosnian Croats and Bosnian Serbs. They are sometimes thought of as an invisible Muslim population in North America because they are racially white and dress in Western clothing. In the Midwest, however, they are among the most populous unreached people groups. North American Christians have less focused ministry among Bosniaks than perhaps any other unreached people group prevalent in our cities.

Where are Bosniaks in North America?

Around 70,000 Bosniaks live in Chicago, the largest concentration of Bosniaks outside of Bosnia. That designation used to belong to St. Louis but the community has been moving away from their enclave in Bevo Mill, and their estimated population in the St. Louis area is now only 50,000. Ten other cities have between 5,000-12,000 Bosniak Muslims (Jacksonville, Phoenix, Detroit, Des Moines, Grand Rapids, New York, Toronto, Atlanta, Utica, and Bowling Green).

St. Louis is an interesting study in how immigrants can transform a neighborhood. St. Louis has long been the dominant center of Bosniaks in North America. It’s the only place on our list where there is substantial active ministry among them. Bosniaks turned the dilapidated Bevo Mill neighborhood into a vibrant colorful community with bakeries and hair salons. It became known as little Bosnia. The community flourished in the ’90’s through 2010, but then increasing violence has started closing many businesses as Bosniaks seek the refuge of the suburbs–nearby Mehlville. Refugees and immigrants have a unique ability to change run down neighborhoods for the better. They bring new life with their new families.

Many Bosniaks experienced extreme forms of trauma during the ethnic cleansing of their people in the early ‘90’s. Many endured unspeakable things, yet seeking mental health help is looked down upon in the community. Even with a significant amount of ministry engagement in St. Louis, there are no established churches there or in any of the other 11 Bosniak populations. Bosniaks remain significantly unreached. Ministry among Bosniaks likely needs a holistic approach of gospel sharing with counseling and soul care.