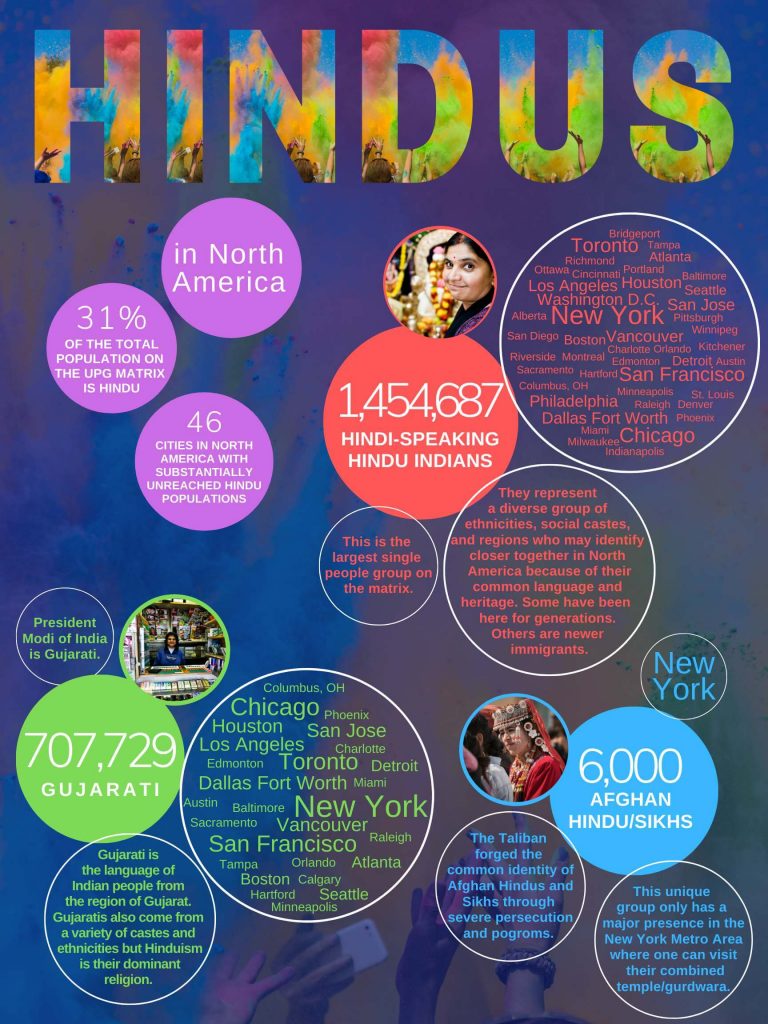 How much do you know about Hinduism? They have a lot of gods. One of them looks like an elephant. There are a lot of statues involved. People say namaste at the end of yoga. But have you ever met a Hindu? As with all religions, people’s practices vary a great deal according to their specific culture and preferences. This week we will be learning a little about the colorful people among the most unreached who practice Hinduism.

If you meet Hindus in North America (and throughout the world) there are high chances that they will be from India. We divide those by two major language groups: Hindi and Gujarati (although there are many more languages involved). According to our research, there are over 2 million significantly unreached Hindus in North America. All but 6,000 are from India. Those other 6,000 are Afghan Hindu/Sikhs. (Note: There are many Indo-Caribbean Hindus in New York City but a significant minority of their population are Christian which takes them off the “unreached” list.).

There is a substantial Hindu population in virtually every major North American city and some cities are home to numerous Hindu temples and cultural centers (*Click downloadable infographic for more information on Hindus in North America and other unreached people groups to pray for.). The most common occupations for Hindus include IT, medicine, or small business ownership such as hotels, restaurants, or gas stations.

Family is one of the highest values for Hindus. Parents are concerned with quality education for their children and are very careful to choose where they live and play. Family relationships also influence Hindu religious activities. Even if a person is theologically an atheist or agnostic, they might still identify as Hindu and participate in religious traditions at the temple or in the home primarily because it honors their parents and ancestors.

All of this can give us clues as to how to talk about Jesus with Hindus in an honoring way. If Christ-followers wish to share the gospel with Hindus, they should strive to meet their family members as early as possible and include them in the relationship. We are not trying to evangelize an individual, but rather the whole family unit.

Many Hindus respect a person who is mindful of God and who exhibits qualities such as humility, modesty, simplicity, responsibility, and generosity. When sharing Christ with Hindus, Christians should communicate the implications of Christ’s resurrected life for today. Instead of relying on pure reason to address common debates such as universalism, believers should point to the risen Christ and emphasize the peace that Christ brings between people and God. May the millions of Hindus in North America hear about that peace and choose to believe in the One who offers it.