The Most Unreached Buddhists in North America 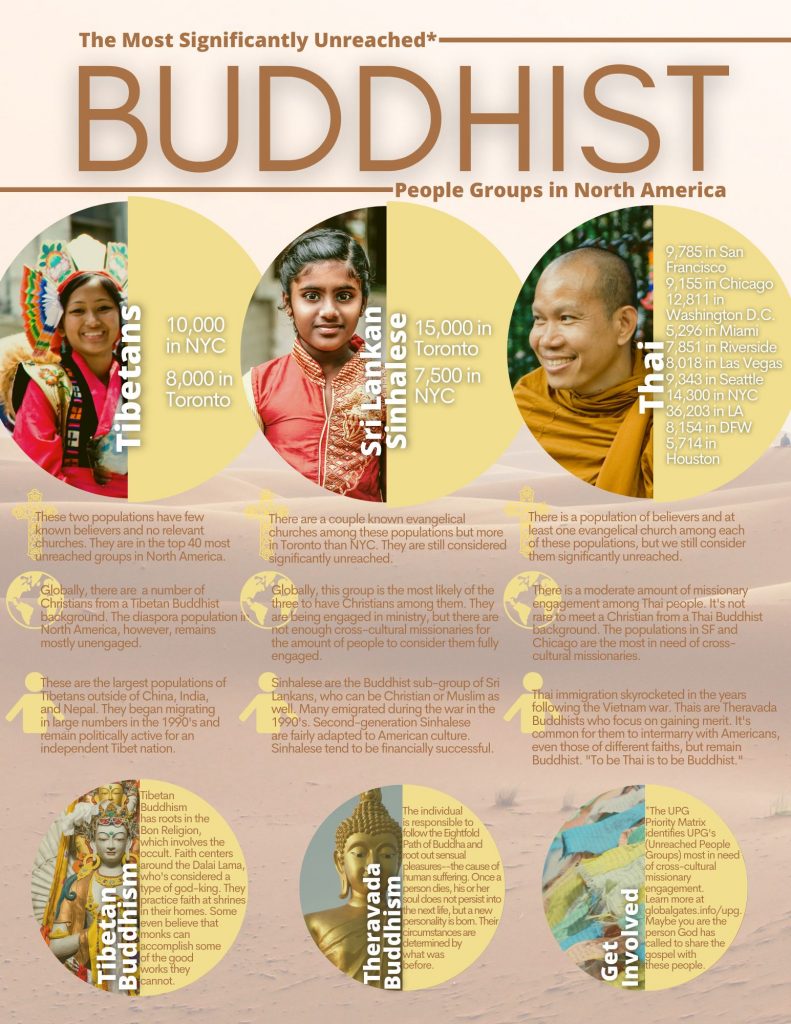 Sometimes in North America casual Buddhism is adopted by progressive mystical people. They like the meditation, good deeds, and mystical union with some form of eastern religion. People attend Buddhist retreat centers for deep breathing and meditation exercises. Yet for most Buddhists in the world, Buddhism is more than a few religious practices. Being Buddhist is part of their identity. Many Tibetans or Thai people might not even “practice” Buddhism, but they would still staunchly identify as Buddhist. There are more than 150,000 Buddhists who need to hear the gospel within the most significantly unreached Buddhist groups of North America. They come from Thailand, Tibet, and Sri Lanka.

Tibetan Buddhists are Unlikely to Hear the Gospel

Thai are near the bottom of our list. But this is one list where it’s good to be near the bottom! Out of these three groups, Thai Buddhists definitely have the most Christians who share their background. Out of the 11 cities in North America with significant Thai populations, there is at least one evangelical church. Of course, one church is certainly not enough for a population of 9,000 or 14,000. There is also a moderate amount of cross-cultural missionary work among them. San Francisco and Chicago are the places with the most need of new missionaries among Thai people.

These are the Buddhists in North America who most need to hear the gospel: Tibetan, Sinhalese, and Thai (many Taiwanese and Chinese practice a form of Buddhism but their syncretistic beliefs and practices are more accurately labeled Chinese Popular Religion; there are also many more Christians among them than these three groups). Global Gates would love to see more work happening among our Buddhist neighbors. Maybe you are someone who wants to pioneer some work? Maybe your involvement could help move Tibetans to the bottom of the list or finally push Thai Buddhists off the list? God is working among each of these peoples, so let’s consider how we might each be called to be a part of bringing them into the kingdom of God.