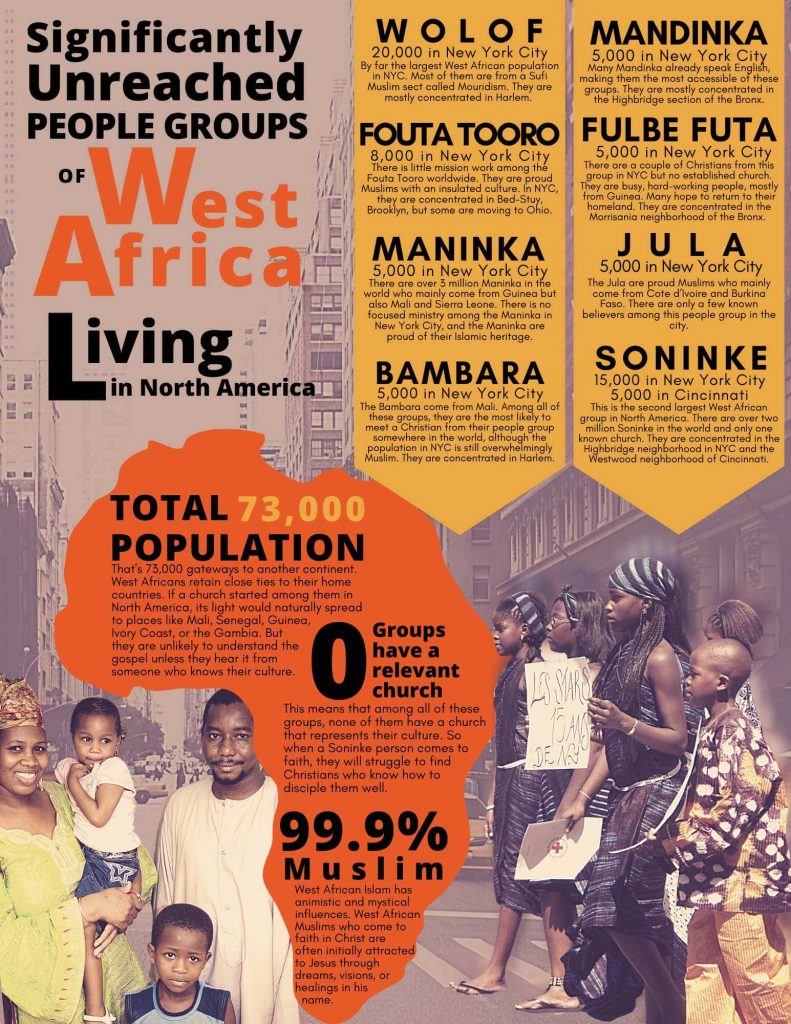 North America has a substantial population of West Africans, with an overwhelming majority living in the New York Metro Area. There are eight substantially unreached people groups of West Africans: the Wolof (likely the largest population), Fouta Tooro, Fulbe Futa, Maninka, Bambara, Mandinka, Jula, and Soninke. Today we asked one of our Global Gates missionaries to highlight the Fouta Tooro people for us. They are among the most unreached West Africans in North America. In fact, all of the West African people groups on the UPG Priority Matrix are in the top 70 most unreached.

Stories of the Fouta Tooro

The Fouta Tooro (a Fulani subgroup) from Senegal and Mauritania, live throughout America in Brooklyn (NY), Memphis (TN),, and Cincinnati and Columbus (OH). They were the first West Africans to receive Islam, and they take pride in spreading Islam across West Africa. They are a traditional and strong community, making it difficult for outsiders to share the love of Jesus with them.

In Brooklyn, you can spot West African men selling socks, belts, shirts, cell phone covers, and many other accessories at tables on the sidewalk or in shops. When two missionaries arrived at one of those shops in Brooklyn on a hot afternoon, they met up with a friend named Amadou. The last time our missionary had spoken to Amadou, the missionary did not know any Pulaar, the Fulani language. But this time he greeted Amadou in Amadou’s heart language and watched his reaction of surprise. He was so excited because they had not seen each other in over nine months due to travel. Amadou chatted with both missionaries, even taking time to translate for the one who could not speak Pulaar. This is a very important part of their culture–to make sure each person is shown respect and hospitality. Toward the end of the conversation, the missionary asked Amadou if he had given him an Injil, a New Testament, in Pulaar. He replied, “No.” Amadou received a Bible. Within a couple of weeks he began asking questions about what he was learning. The workers among the Fouta Tooro are few. Yet there are opportunities like this where it’s clear that the Fouta Tooro are thirsty for the Word of God.

How Will You be Involved?