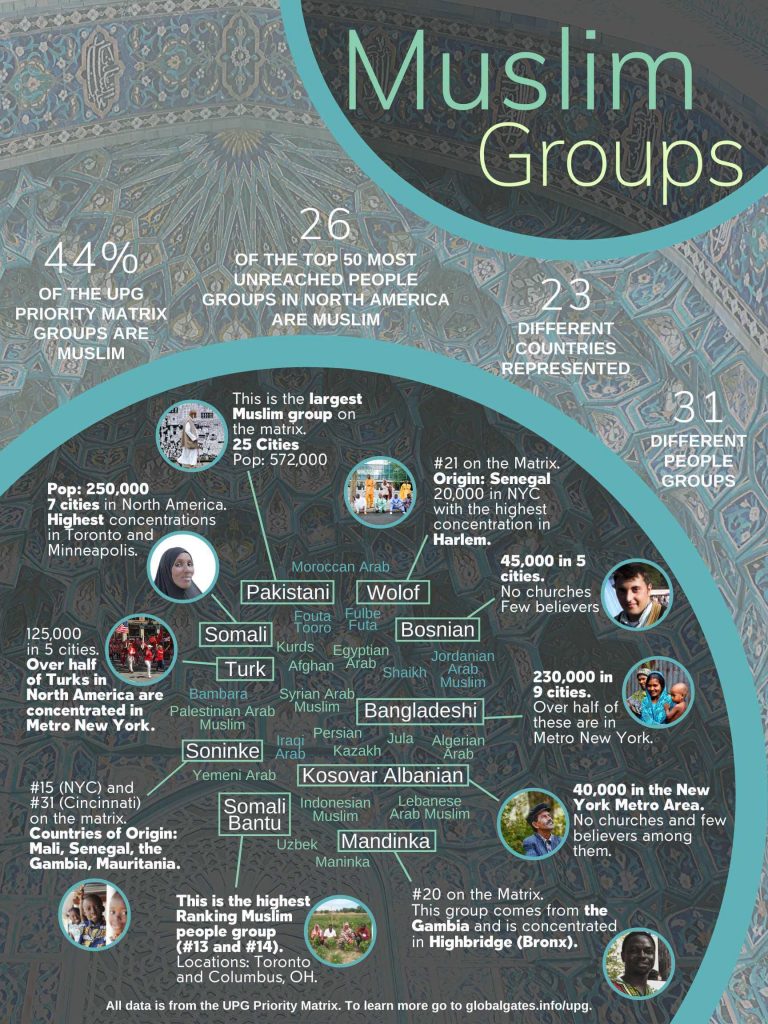 Missionary work among Muslims has increased significantly in the last twenty years. There have even been more Muslims coming to Christ in recent history than in the entire history of Islam. Yet the Muslim world is vast and diverse and still very unreached. A strategy that works really well in one part of the world doesn’t necessarily work in even a neighboring country. On our matrix, there are 31 different Muslim people groups concentrated in 35 different cities in North America. Muslims belong to the most diverse unreached religious block in the world. Their homeland spans from West Africa all the way to Southeast Asia.

The Odds are Good

So let’s say, for example, that you live in Houston. In the Houston Metro Area alone there are seven different substantially unreached Muslim people groups (Pakistani, Bangladeshi, Morroccan, Lebanese, Palestinian, Iraqi, and Persian). These seven groups all speak different languages or, for the Arabic speakers, different dialects. Nearly 92,000 people comprise these seven different groups. That seems like a big number, but if you consider the Christian population of Houston, it’s pretty small. Of the megachurches in Houston alone, there are 640,000 attendees. This means that there are 7 mega-church attenders for every Muslim in Houston who hasn’t heard the gospel.

If normal Christians–not pastors or professional missionaries–started befriending Muslims and sharing the gospel with them in Houston, much of the Muslim world could be impacted. It’s the same in many major cities in North America.

If you’re a Christian in one of the 35 cities with substantial populations of Muslims (and even if it’s just a small population), how do you bridge that gap between you and them?

It will almost certainly require you to exit your comfort zone. Pro tip: Your comfort zone wasn’t doing much for you anyway. You likely wouldn’t have to go very out of your way to meet and befriend a Muslim.

Meeting a Muslim is easy. Becoming friends with a Muslim is just like being friends with anyone else. As long as you go into situations with humility and genuine curiosity, things will be good, even fun! As you spend personal time in prayer and Bible study, you can talk about those things with your Muslim friends, just like you might with any other friend.

They are the Unreached Within Reach!

Seeing Muslims from all 31 of these groups in North America become Christians is very feasible. Unlike many of their countries of origin, the government will not penalize them for going to church, getting a Bible, or even converting. Also unlike those countries, you are at little to no risk for sharing the gospel with them.

So let’s do this! Share your stories about befriending Muslims with us. We’re excited to see pockets of these unreached people groups become vibrant churches following Jesus. And we’re here to help in any way we can!