The history of Europe and Islam is long and fraught with war. If not for technologically advanced weaponry that helped Charles Martel stave off the advance of the Moors into 8th century France, Western Europe could have been swallowed into the Umayyad Muslim caliphate. Many centuries later, the Moors were pushed out from Spain and back into Africa. From Eastern Europe, the Ottoman Empire ruled a vast Muslim caliphate for over six hundred years before dissipating shortly after World War I. The first large immigration of Muslims to Metro New York consisted of Syrians and Lebanese with Ottoman Empire passports. These days, the largest European Muslim migration to Metro New York comes from countries that are vestiges of the collapsed Ottoman caliphate in Eastern Europe, with Turks and Albanians having the most significant populations.

Turks
Many Turks in Metro New York were raised in a secular Turkish state and have a nominal Muslim faith. On the other hand, because Turkey has long been a secular state and has even periodically banned women from wearing Islamic headscarves, many Turks choose to become more conservative in practice and display of their Islamic faith after migrating to America. The Gülen Movement, a moderate Turkish branch of Islam, has extensive influence throughout the world. Their leader lives on the outskirts of Metro New York in eastern Pennsylvania—within a two hour drive of New York City. The movement has spread their influence throughout America by creating the most extensive charter school network in the country. North New Jersey hosts several Gülen charter schools. In February 2016, the Turkish government shuttered the Gülen-sponsored newspaper Zaman (the nation’s largest with a circulation of 650,000) in Istanbul, accusing the paper and the Gülen movement of subverting the Turkish government.

Albanian
Albanians are another group spread throughout the city. Northern New Jersey around Paterson and Clifton, a largely Kosovar Muslim area around Bronx Park, and the northern part of Staten Island are just a few concentrated sites. Around seventy percent of Albanians in the city are Muslim with a majority of the rest being Orthodox or Catholic Christian. Both Gheg and Tosk speakers abound and some smaller Albanian enclaves in Metro New York consist almost exclusively of people from one town or region of Albania. People claiming Albanian ancestry spiked in the city from 42,084 in 2000 to 73,676 in 2013. I estimate the Albanian Muslim population to number 70,000 today. 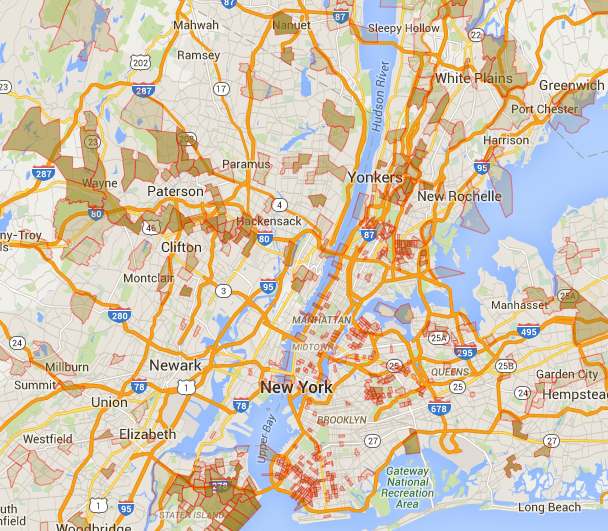 Bosnian
Although the United States receives a large number of refugees, New York City is usually not a refugee resettlement site because the city is expensive and available housing is scarce. However, many economically ambitious refugees and those who have family connections in New York City often find their way to the city. The Bosnian community, most of whom arrived after the horrific Bosnian War in the 1990s, are almost all refugees resettled in the area. Astoria, Queens and the Hackensack area of New Jersey are two of their concentrated settlement sites. The 2000 Census estimated 3,781 people in Metro New York were born in what is now Bosnia and Herzegovina. This population was estimated to rise to 5,893 people in 2013 (American Community Survey). Based on interviews in the Bosnian community and the steady increase of the Bosnian population, I estimate their population to number 10,000 in Metro New York.